On August 14, 2014, the Presidents of Honduras, Nicaragua, and El Salvador participated in the "Second Technical Preparatory Meeting - Gulf of Fonseca" in Managua, Nicaragua. 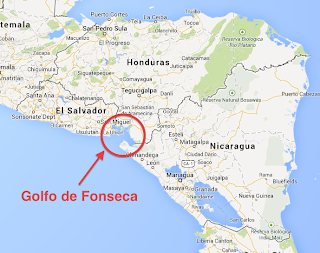 In the meeting, Juan Orlando Hernández (President of Honduras), Daniel Ortega (President of Nicaragua), and Salvador Sánchez Cerén (President of El Salvador) defined their nations' interests in projects that would develop the Gulf and came to an agreement on investments in the following sectors: Infrastructure, tourism, agroindustry, and renewable energy.

The meeting declaration outlines 12 agreements that were reached and mentions interest in the development of various projects that would facilitate transportation between the three nations and development in the Gulf. These projects include: a ferry from the La Union Port in El Salvador to Port Corinto in Nicaragua, and a ferry or shuttle from La Union, El Salvador to Potosi, Nicaragua expanding to Amapala and San Lorenzo. 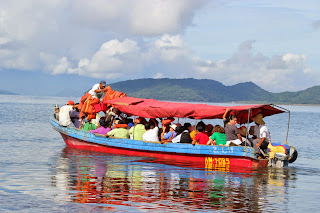 The report also mentions the "implementation of a Employment and Economic Development Zone (ZEDE) [known as a Model City] that includes a logistics park." The idea is to convert the Gulf into a "Free Trade and Sustainable Development Zone." 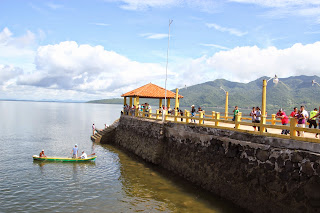 The declaration itself as well as articles in Honduran national newspapers report that President Juan Orlando Hernandez will request financial assistance for this infrastructure - including a large dock between Coyolito and Amapala - from South Korea, the Central American Bank of Economic Integration (BCIE), and the InterAmerican Development Bank (BID). Shortly after these announcements, on September 5, 2014, La Prensa wrote that the BID would finance $7.9 million for projects in the Gulf - $6.6 million for the "Regional Economic Development of the Gulf of Fonseca" and $1.3 million for "Value Chain and Rural Business" program(s). This specific contribution is not the only international loans contributing to 'development' in the Gulf of Fonseca.

Approximately one month later, President Hernandez along with other Central American Presidents, presented the "Prosperity Partnership Plan for the Development of the Gulf of Fonseca" to the United States government and the United Nations during a trip to Washington. This Plan is being proposed as one solution to the "constant and growing migration" to the United States, a topic that has picked up pace since the child migration issue became a hot topic in mainstream North American media. 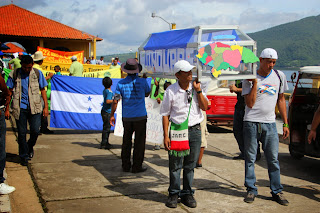 Last week on October 23, communities and individuals from all over Southern Honduras (El Transito, Nacaome, Amapala, Zacate Grande, Tegucigalpa, etc) crossed the beautiful Gulf of Fonseca - from Coyolito to Amapala - to participate in a march against the ZEDE project proposed for the area. While some participants handed out copies of the ZEDE law, over 500 people marched from the Amapala dock to the municipality office. 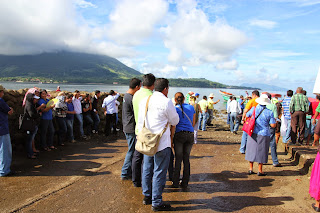 Over 500 people waiting for the boats to cross the Golf of Fonseca to participate in the march. Oct. 23, 2014.

One participate from Amapala told me (as was reported in the Honduran press) that three mayors from southern Honduras, including the mayor of Amapala had recently (in July or August 2014) traveled to South Korean to learn about a potential Korean investment in a megaport in Amapala. Since his return, mayor Santos Cruz Guevara, has organized three cabildo abiertos or information sessions in Amapala to inform the population of his trip including that the South Koreans would be conducting a feasibility study in the region in the coming months.

Shortly afterword, one woman in Amapala reports seeing foreigners - thought to be from Korea - measuring land on her property. When asked what they were doing, the group responded that they were measuring land for a project they wanted to build on the island.

Although there are proposals to construct ZEDEs in other parts of Honduras (like in Trujillo for example), the communities participating in the march last week worry that the project has advanced rapidly without informing or consulting the local population as to its specifics or impacts. Many complain of the lack of transparency in which the Honduran government has promoted the project and ZEDEs in general, as well as the potential exacerbation of existing land conflicts if the Honduran government decides to move forward. 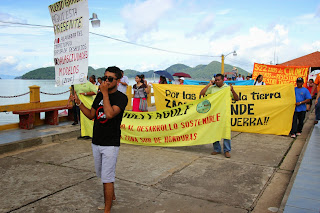 The individuals, organizations, and communities in attendance at the march reaffirmed their desire for community development in southern Honduras but emphasized that they were against "that kind" of development or large-scale, top-down, non-participatory, neoliberal development like the ZEDEs/Model Cities. 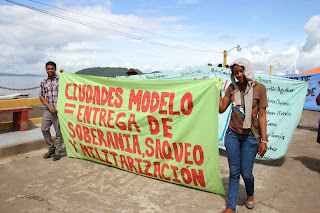 Karen has lived and worked in Honduras and Central America since 2008 and currently is the Honduras Coordinator for the Honduras Solidarity Network (HSN).