Today in San Pedro Sula, Juan Charles Bográn Velasquez, a key witness in the IHSS scandal was shot 14 times while driving in his vehicle with his body guard, Julio César España Chinchilla. It is suspected that Bográn Velasquez will not survive given the extent of his injuries.

David Romero of Globo TV announced this information over his radio and TV program this afternoon. The man that was shot was a witness in the IHSS corruption scandal that involved the looting of $350 million dollars from the Social Security Institute (IHSS) in 2012 and 2013 during the Porfirio "Pepe" Lobo administration. The IHSS provides medical care and pensions to approximately 600,000 public and private sector workers and their families around the country. 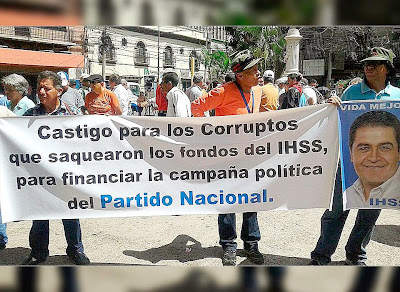 Photo caption: Banner reads, "Punishment for the corrupt individuals that looted the IHSS funds to finance the political campaign of the National Party." Source: El Heraldo

The IHSS scandal is not new in Honduras but has received a lot of national and international attention over the last few days because of new evidence that has emerged that allegedly proves that the money stolen from the IHSS was transferred to the National Party. The money was then suspected to have been used to finance the National Party's campaign in the 2013 Elections. The evidence that has recently emerged via David Romero from Globo TV includes a series of cheques - some actually written to the National Party of Honduras - and others in the name of ghost companies that were suspected to have been created to launder the money. The evidence also includes the names of individuals involved with the ghost companies, many of which are closely tied to the National Party. Bográn Velasquez - the man just shot today - was involved himself in one of the ghost companies and was expected to testify (if the case ever moved forward in the Ministerio Publico) about the link between the stolen money, the high level government officials including the President of Honduras Juan Orlando Hernandez that are allegedly involved in the scandal, and the role of the ghost companies.

Last week, a new Social Protection Law was approved in the Honduran National Congress that dramatically transforms the IHSS and essentially privatizes the institution. The reforms of the IHSS under the new law were one of the Structural Adjustments demanded by the International Monetary Fund (IMF) that approved a loan to the Honduran government in December 2014. Interesting, Mauricio Oliva of the National Party, the current President of the National Congress oversaw the approval of the new IHSS law last week, and was also part of the Health Commission in the Honduran Congress that oversaw the approval of the millions of dollars of contracts to the ghost companies during the last administration.

The new IHSS law passed last week (but that has not been published), reduces the monthly contributions the Honduran state is required to make to the IHSS; dramatically transforms the way that pension funds are managed; and significantly reduces medical and pension benefits for public and private workers. Under the new law, the IHSS will simply act as an administrating body that will subcontract health care services to private clinics and hospitals.

Since the $350 million dollars were stolen from the IHSS, the services in the IHSS hospitals have deteriorated significantly. Once known as the best hospitals in the country, patients and their family members are now required to purchase medications and all medical supplies from private pharmacies and medical supply companies before receiving adequate medical attention in the IHSS. The implications of the $350 million stolen from the IHSS have meant a major deterioration of healthcare services, but also contributed to the public discouragement in the IHSS and most recently, been used as a justification to privatize it's services.
Posted by Aqui Abajo at 2:33 PM